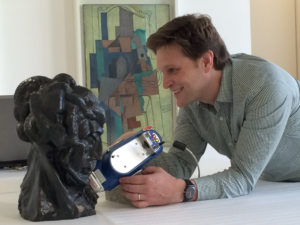 The international research team of scientists, art conservators and curators used the portable instruments and a robust database of alloy “fingerprints” to non-invasively analyze a priceless group of 39 bronzes (cast between 1905 and 1959) and 11 painted sheet metal sculptures (from the 1960s) in the Musée national Picasso-Paris’ collection.

The researchers were able to trace five bronzes cast in Paris during World War II to the foundry of Émile Robecchi, a lesser-known collaborator of Picasso’s. They also discovered Robecchi’s alloy compositions varied significantly during 1941 and 1942, likely reflecting the challenging circumstances of the Nazi occupation of Paris. In their study of Picasso’s cast-iron sheet metal sculptures, the researchers are the first to report the use of silver for facial features in a work inspired by one of his wives.

Continue reading this article from the Northwestern New HERE.