Northwestern researchers and students have launched a cross-disciplinary pilot project that could put the University at the forefront of enabling artificially intelligent access to federal court records. Accessing those records through the current online PACER (Public Access to Court Electronic Records) system is onerous. Not only is the interface not intuitive, but the federal government charges 10 cents per page downloaded.

For researchers who want to look for patterns among the records, that’s no small fee. In 2018 alone, the federal court system handled approximately 300,000 new civil cases and 75,000 criminal cases generating millions of content pages. 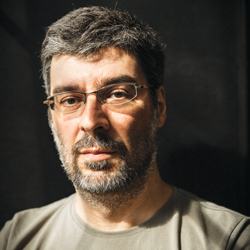 “It makes no sense,” says Luís Amaral, Erastus Otis Haven Professor of Chemical and Biological Engineering at Northwestern Engineering. One of Amaral’s specialties is finding new patterns among large data sets. So when he heard Dave Schwartz, Stanford Clinton Sr. and Zylpha Kilbride Clinton Research Professor of Law at Northwestern Pritzker School of Law, give a presentation about this problem, Amaral started thinking about solutions.

“If we can’t see or measure what’s happening in the judicial system, how can we know what’s going well, or what needs improvement?” he says. Amaral, who also codirects the Northwestern Institute on Complex Systems, got together with a group of computer science and law school faculty members to consider the problem.

What made most sense was to download all the federal court records and create their own open and searchable database. A great idea, but such an endeavor could cost $100 million. Problem solvers by trade, the group members found that if they downloaded only the table of contents for each case, they would have enough information about the judge, attorneys, litigants, and cases to create a useful database.

The group launched the Northwestern Open Access to Court Records Initiative to prove the concept. The first step was to download information from all federal civil and criminal lawsuits brought in the years 2010 and 2015 for the US District Court for the Northern District of Illinois (covering Chicago) and the Northern District of Georgia (covering Atlanta). They also downloaded biographical information on all active judges in the two districts and identified all publicly traded corporations named in a case.

We hope to create an ecosystem of applications and tools that will enable reporters, lawyers, economists, political scientistis, and the public to study this system. The courts system should be a paragon of openness and transparency. This system will help that

“It’s a fundamental artificial intelligence and computer science problem,” says Kris Hammond, Bill and Cathy Osborn Professor of Computer Science. “How do you give people access to complex analytics when they don’t know how to describe exactly what they need? The answer—by employing natural language to drive search and analytics.”

The pilot was so successful that the initiative received funding from the National Science Foundation. The Northwestern team is working with Solstice, a Chicago-based digital strategy and user experience firm, to design and deploy the first version of this system.

“We hope to create an ecosystem of applications and tools that will enable reporters, lawyers, economists, political scientists, and the public to study this system,” Amaral says. “The courts system should be a paragon of openness and transparency. This system will help with that.”

This post was originally published in the McCormick School of Engineering’s Fall 2019 Magazine.