Once more, a mass shooting is in the news. This time, the death toll was 17. A study by Northwestern researchers demonstrates how economic insecurity and gun availability create a deadly cocktail in the US.

A rigorous Northwestern University study of a quarter-century of data has found that economic insecurity is related to the rate of gun violence at K-12 and post-secondary schools in the United States. When it becomes more difficult for people coming out of school to find jobs, the rate of gun violence at schools increases. The interdisciplinary study by data scientists Adam R. Pah and Luís Amaral and sociologist John L. Hagan reveals a persistent connection over time between unemployment and the occurrence of school shootings in the country as a whole, across various regions of the country and within affected cities, including Chicago and New York City. 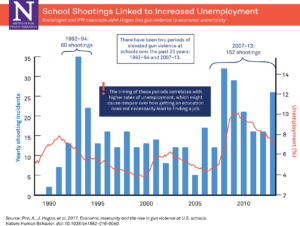